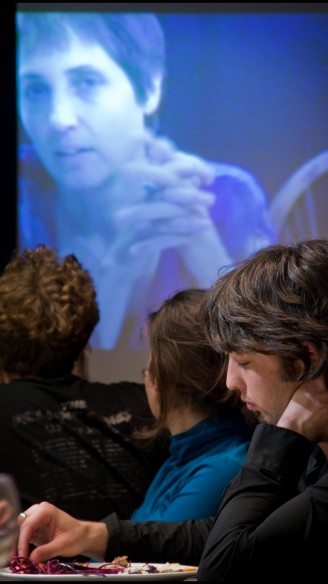 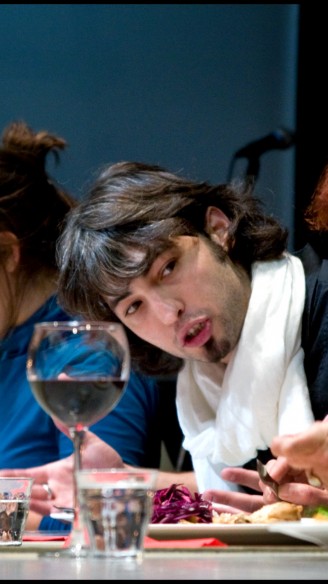 "Slowly we all are becoming a part of Ilay's life...."
Lees het volledige artikel

"A theatrical experience begins before the theater curtain goes up. Since a theater piece is not made and performed in a vacuum, the reality outside the theater has a significant importance for the way in which the audience perceives the theatrical event."
Lees het volledige artikel

"When Ilay finally has a confrontation with his mother, with Israèl, but especially with himselves occurs, it touches the public the most"
Lees het volledige artikel

“If I would consume every Jew including myself, my fear will finally be digested!
Doing so I would carry these beautiful people for ever inside of me, to a point where I will never lose them.
Even better so: we will never be able to damage others nor ourselves.”

Have a seat at the Bar mitzvah meal by the Dutch/Israeli theatre maker Ilay den Boer. Attempt to find the meaning of being Jewish in the here and the now together with his mother, himself, twenty other guests and a vast history.

Bon Appetit is the first step of the Dutch/Israeli theatre maker Ilay den Boer in the series performances The Promised Feast. In this series of performances Ilay takes a close look at himself, his family and by that the state of Israel and the Jewish history. By researching this he attempts to name the unnameable of a war, the incredible complexity of the Jewish history,  and to expose and unravel the Jewish identity. The sense of responsibility in this world of the human race and therefore of the audience will be questioned. On the website www.hetbeloofdefeest.nl you can read more about the context of the series.

In the second performance Whining and Shooting (Janken en schieten) Ilay together with his audience steps in the bus where his grandmother had isolated herself the last years of her life to write down her story. She wrote about fleeing Lithuania and the journey she undertook to get to Israel during The Second World War. By looking at the historical context together with the audience, Ilay attempts to say something sensible about Israel’s nonsensical war. A performance that shows how the Holocaust became the justification for the Jewish war. In the third part, This is my father (Dit is mijn vader), Ilay looks together with the audience through the eyes of his father at the prominent rol Israel plays in The Netherlands. This is my father is performing in March en April of 2010.

The Dutch/Israeli theatre maker Ilay den Boer studied two years at the Amsterdamse Hogeschool voor de Kunsten. In the season 2008/2009 he started with the series performances The Promised Feast. A series of six personal performances about the meaning of his homeland Israel through the eyes of himself and his family. After many performances of Bon Appetit (Eet smakelijk) in Dutch theatres and at festivals the performance got selected by the Belgian jury of Het Theaterfestival 2009, a festival that portrays the ten best performances of the Dutch and Belgian past theatre season. The series is produced by Het Huis van Bourgondië (Maastricht, NL), detheatermaker (Antwerpen, B) and Over het IJ Festival (Amsterdam, NL). In 2009/2010 Ilay will make the third performance of the series. He will take Bon Appetit abroad and he will perform Whining and Shooting at several summer festivals in The Netherlands and Belgium. In 2008 Ilay did the programming of the festival Confronting Cultures: Israel op het podium. For the second edition of this festival in 2011, which will be in Tel-Aviv and Amsterdam, Ilay is appointed as the artistic director. Furthermore Ilay is closely involved with the theatre company Stichting Nieuwe Helden.